Reading it, it doesn’t surprise me at all that former world chess champion Garry Kasparov majored in English (as a foreign language) when he attended college in his native Azerbaijan. His English is better than that of most Americans. 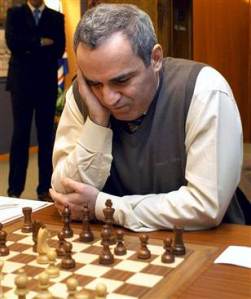 Kasparov’s book is so far a fascinating read. His full name is now Garry Kimovich Kasparov, but apparently it was originally Garik Kimovich Weinstein. He was born in Baku, Azerbaijan and was the son of an Azerbaijani mother (who, herself, was of Armenian descent) and a Russian Jewish father. Kasparov’s father died when he was young, and since his mother’s Kasparian family did not have any males to carry on the name, he chose to do so and Russified Kasparian to Kasparov.

I often have thought the key to success in life is find people you admire (for good reasons) and read about them. Learn from them.

Perhaps something else about Gospodin Kasparov that appeals to me is that he is well-read and well-traveled and very active. Those are three things I aspire greatly to. He notes how much English literature he’s read but marvels at how few Americans have read Russian literature extensively.

It’s not the fastest reading book in the world, but it’s an enjoyable read so far.